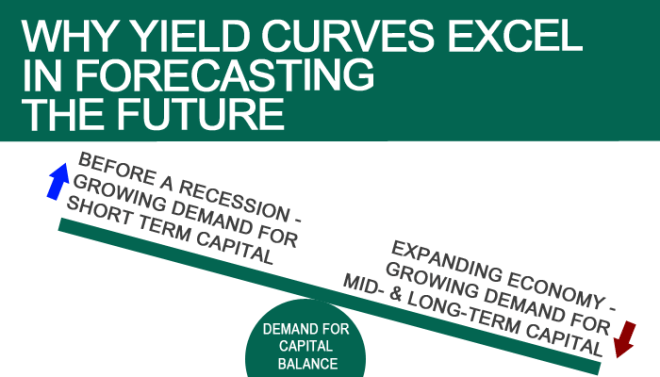 Why is the shape of a Yield Curve a solid predictor of a recession (or a recovery)?

I actually have never heard a coherent explanation why a flat or inverted Yield Curves signal recession so well. Typically 99% of answers to that question would center around what a Central Bank of a country would do and what investors think about its possible moves.  It has some validity but the argument is incomplete.

Here is my fundamental explanation of business realities moving a Yield Curve.  In a steady or recovering economy, most businesses would be asking for money (credit) to finance longer term investments (plants, shops, warehouses, etc.) which typically have 3-5-7 years timeline of completion. Therefore, at those steady stages, the demand for long-term capital exceeds the demand for short-term capital.  In those periods, resulting higher demand for a capital boosts long term interest rates.  A Yield Curve at that moment would remain steep or steeper (if an economy is accelerating). When an economy starts slowing down, businesses halt launching new long-term investments and many companies start experiencing a cash crunch. During a cash crunch, their working capital would be ballooning (clients are not paying past due receivables, and inventories are sitting on the shelves or in warehouses). Those cash-starved companies rush to banks requesting: Please give me a 6-month loan, any rate, now please, please! The demand for short-term capital explodes and short-term interest rates spike.  (Sometimes called involuntary inventory accumulation). See the Figure 1. 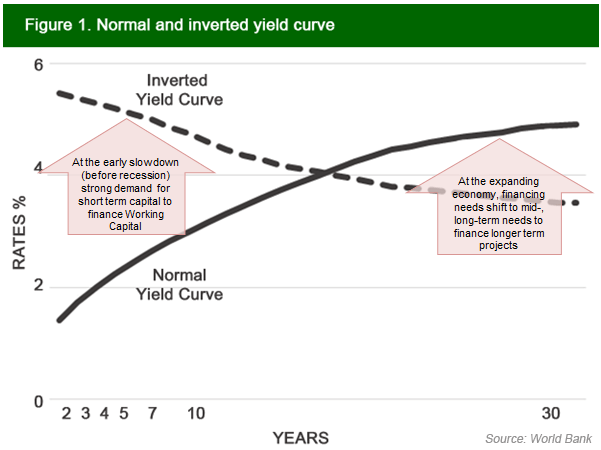 The exact interplay is less relevant – there is no exact mathematical pattern. The Yield Curve could either invert or just flatten out but the overall message is undeniable: companies’ higher needs of short-term money than longer term funding, is the profound reason for changing a shape of a Yield Curve. That happens way before economists begin noticing signs of any weakness in official statistics. It is all interconnected – all bank loans, credit, and corporate bonds are all priced, hedged and swapped with the government bonds and, therefore, the interlink is unbreakable. It all starts at the grass root level: business executives and business owners curtail unprofitable investments and  seek more short-term funding to finance expanding working capital needs. So the Shape of the Yield Curve reflects a changing time frame of the most critical funding needs for businesses during economic cycles. See the Figure 2: it shows that the Slope of a Yield Curve is a really nice leading indicator of a recession. In that particular case, we use the a simple difference between a 10 Year and 1 Year Yield of Treasuries. Obviously, those points on the curve vary enormously across time and countries. 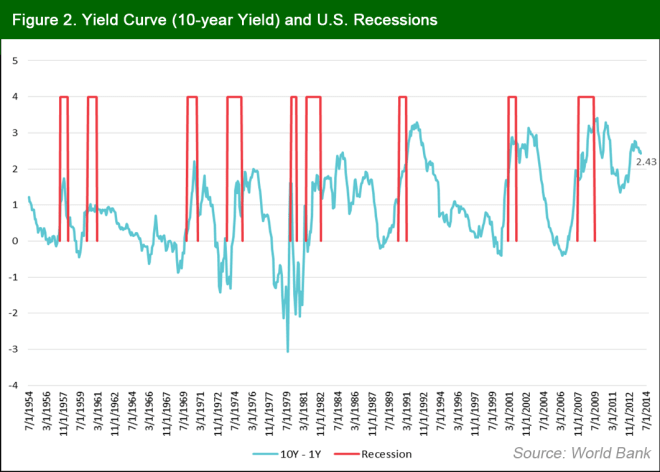 Then, why do Central Bankers are inferior at making economic forecasts: because they don’t listen to the market and try to predict the economy, using inherently lagging statistics. The point why Yield Curves are so much better at predicting recessions is simply because Yield Curves is The Market while a Central Bank is just one (although very important) of the contributing forces in the market.  Central Banks do try to mitigate the economic cycle (and, if you believe their romantic goals of managing inflation and full employment) why does the cycle still exist?  Please disagree with me!  Do you have an alternative explanation why a shape of a Yield Curve  has such a good predictive power?

At this moment, I expect you to ask: What do Yield Curves tell about the future NOW?

Well, I do have strong views on that, please read my next post in 2 weeks.