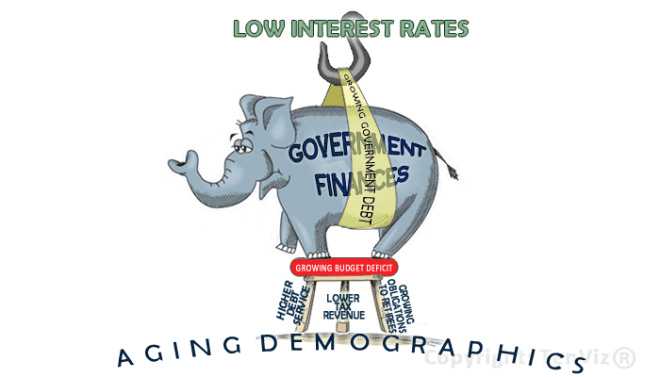 This is a Part 2 of a series of articles on: Why Interest Rates Would Stay Low No Matter What the Fed Says or Does. Read Part 1 here, please.

Most people would argue that higher level of government debt would lead to higher interest rates making an intuitive analogy to a consumer with poor credit scores who can only get a loan at some elevated rates. But interest rates spikes for sovereign debts happen only for relatively short periods of time typically in small economies experiencing a deep economic crisis (think European PIIGS from the recent crisis there). This is a cyclical phenomenon. We will elaborate on a circular trends in large, established economies where lower interest rates cause to higher debt levels. The root of these developments is the same – aging demographics.   The causality chain is roughly the following:

Aging demographics undermines demand for large ticket durables (houses and cars, see the previous Part 1), and produces an oversupply of people seeking reinvestment of their savings. This lowers demand/supply equilibrium for capital and predictably pushes interest rates lower. Remember, that in its most basic form, interest rate is nothing but the cost of capital, especially evident between generations. Aging demographics, also damages the growth in employment and ruins growth in labor productivity. Obviously, older people are predictably less agile at accepting new ways of doing things.

All of those intertwined effects result in decreased GDP growth and slower growth in government tax revenues. At the same time on the expense side, governments start facing escalating obligations to growing pools of retirees. Most of those obligations are age-related (retirement age or eligibility for different transfers or subsidies). A government that faces a double whammy of a contracting tax revenue base and increasing financial liabilities to retirees, would inevitably turn to debt markets to finance its obligations. Fortunately, by that time interest rates tend to be quite accommodating (by being very low) and it is easy to fund the growth in government debt. The following grossly simplified diagram illustrates why in established economies, aging demographics predictably leads to higher government debt (see the Figure 5): 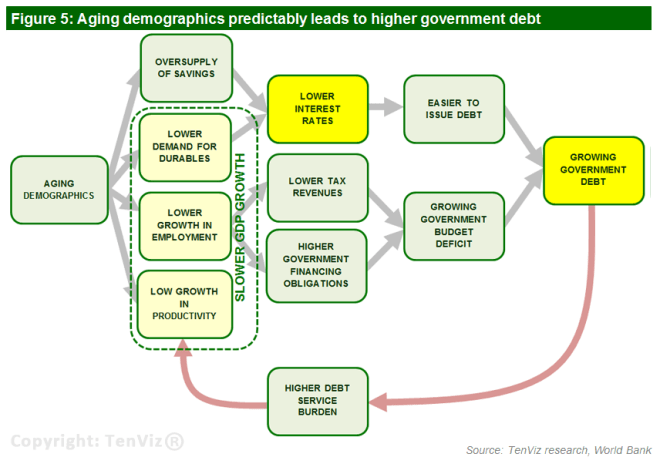 The traditional logic that the government debt should be expressed as some sort of ratio to GDP goes out the window, as it should! Is this crazy? No, this is a highly rational and, probably, inevitable situation. Seriously, we make no judgements here whether a growing government debt is a bad thing or not. But practically speaking, there is no easy way around it. As we follow this logic further, we also observe a clear negative feedback loop: higher government debt leads to the elevated debt burden and that knocks the growth of the economy further down. Instead of investing in value-creating activities with long multiplier effects (infrastructure, education, etc.) a government is forced to pay pensions and healthcare obligations.

Lower interest rates do indeed allow to borrow more. The best analogy is a consumer shopping for a car based on her ability to meet monthly payment. Remember going to a car dealership and having an ultimate discussion centered around the amount of a monthly payment? That amount does include both the interest rate and the negotiated price of a car. 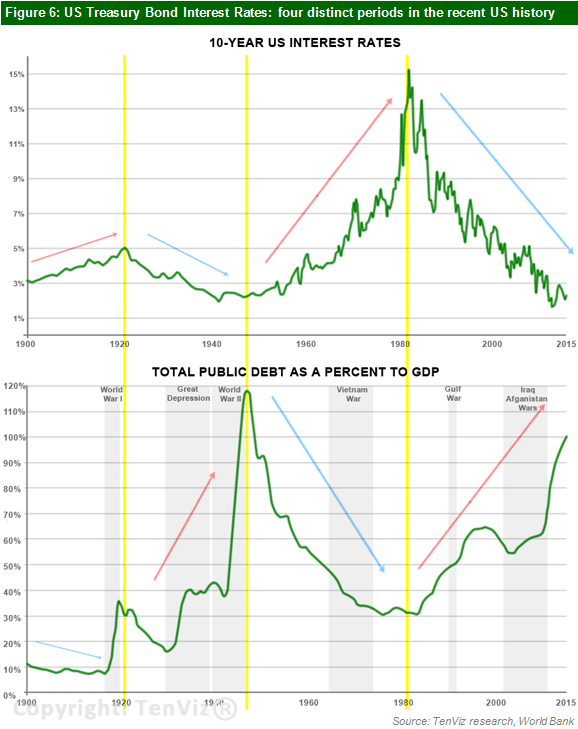 Even with expected spikes in debt caused by major wars (WWI and WWII), it is very clear that higher (and ascending) interest rates (see the periods of 1900-1920 and 1955-1980) always acted as a check on government finances, reigning back government’s borrowing. Conversely, low and dropping interest rates allowed higher borrowings in 1925-1940 and in 1980-2015. We strongly believe that the trend onward is well grooved in! We can over-analyze and debate every economic cycle and one-off impacts including Great Depression, Oil Embargo, Wars on Terror, etc. but the dominant trend is still prevalent. Governments end up being literally hooked on low interest rates – we are talking about decades (as our Cover Picture illustrates).

In the subsequent parts we would demonstrate and quantify how in other major mature economies governments predictably use benign interest rates to fund their swelling obligations via issuing debt.